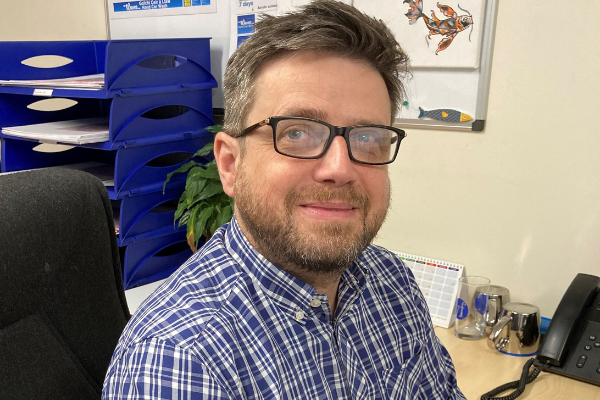 Following on from our interview with Director David Hutchins, we took some time out to speak to Director James Fox. Having joined the business more than 30 years ago, he explains how the world of print and point of sale is changing at a rapid rate.

Set the scene for us: when did you join BDH Tullford?

I started at BDH Tullford – or BD Studios as it was – shortly after leaving school in 1986. The company was owned by my father and his brothers at that point. I joined around the time that discussions were being had about merging with WH Hutchins & Son, which made the company BD&H [now BDH Tullford]. In those early days, I did a bit of everything, learning the screen-printing trade on the job.

Just after the merger, my father died. He left a small amount of money to me in the old BD Studios company; the agreement was that I was to invest in the new company. I followed his wishes and, at that point, I became a director.

Tell us about your early experiences with the business

Originally, BD Studios was a screen printer but when we joined with WH Hutchins & Son, we became screen and litho printers. As technology developed, we then became screen, litho and digital printers.

When I first started work, everything was done manually, but as digital print techniques developed, I found that I was good at digital reprographics, which is where you manipulate artwork files and prepare them for print. I was able to use that skill to help the company invest in digital technology, eventually introducing Apple Macs to the business.

Has the business changed significantly since you joined?

For the better! We were always extremely busy and I didn’t think we could cope with any more work, but the introduction of digital processes means we are much more efficient. In actual fact, we’re doing many, many more jobs than we’ve ever done before.

This is handy because customers expect short lead times and outstanding quality. To keep up with those demands, we have to be up to speed with modern technology.

In terms of that technology, can you tell us more about the investments BDH Tullford has made in recent years?

In the very early days, everything was photographed onto film and then the films were used to make the printing plates. Nowadays, everything is done on the computer. Artwork is sent automatically to the plates making the process much smoother.

The screen printing process remains old-fashioned, however. We’ve maintained this traditional technique because it gives us an extra string to our bow. We can do quite unusual things that add value to the product.

For instance, when we screen print inks, we can achieve very strong colours, which are more like paint than ink. We can print onto unusual substrates too, which don’t have to be regular shapes. Plus, there are special varnishes we can use to enhance the final product.

We’ve always prided ourselves on the number of processes we offer – and they all support each other. Other companies specialise in one thing and have to subcontract out the rest, but we don’t. It means we can manage projects from end to end.

Yes, if a business comes along and explains what it wants to achieve, we make suggestions on how that might be done or highlight alternative solutions.

We have got an enormous amount of experience in that respect. We don’t just respond to what customers want; we innovate.

Are there any specific projects you’re particularly proud of?

A tremendous number! We’ve completed some really interesting work – not least producing giant ice creams! However, I suppose I’m most proud of our ability to innovate on behalf of our customers.

For example, one of our clients has a specialist product that absorbs crash impact in a road accident. They wanted a way to demonstrate that ability in a retail environment. We had to put our thinking caps on for that one!

The POS display we developed features a specialist tube, attached to a backplate, which can be turned 360 degrees. There is a metal ball inside the tube, which, when the tube is turned, falls onto the specialist material and lands flat, rather than bouncing. It demonstrates that the energy has been absorbed by their innovative product.

We love challenging projects like these because they allow us to be creative! We even work with specialist engineering partners who develop prototypes that we can present to the customer and build from. We love seeing our clients’ faces when they receive the final product!

If you’re struggling to develop an attention-grabbing promotional campaign for your business, give us a call on 01603 620780. We’d love to share our experience and knowledge to develop a campaign your customers will love!

This website uses cookies to improve your experience while you navigate through the website. Out of these cookies, the cookies that are categorized as necessary are stored on your browser as they are essential for the working of basic functionalities of the website. We also use third-party cookies that help us analyze and understand how you use this website. These cookies will be stored in your browser only with your consent. You also have the option to opt-out of these cookies. But opting out of some of these cookies may have an effect on your browsing experience.
Necessary Always Enabled
Necessary cookies are absolutely essential for the website to function properly. This category only includes cookies that ensures basic functionalities and security features of the website. These cookies do not store any personal information.
Non-necessary
Any cookies that may not be particularly necessary for the website to function and is used specifically to collect user personal data via analytics, ads, other embedded contents are termed as non-necessary cookies. It is mandatory to procure user consent prior to running these cookies on your website.
SAVE & ACCEPT